Teaser and Poster launch of the ​upcoming bengali movie ​"​OSKAR" 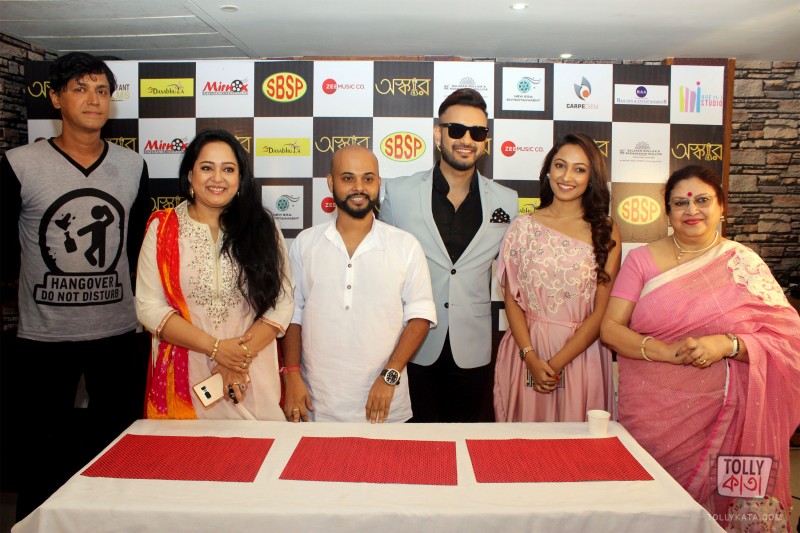 Our film industry is the only industry which churns out a great number of films in comparison to other film industries in the world. A film is always good on paper but most of the time; It doesn’t quite do the same justice on the silver screen. Why so? This is a common phenomenon experienced by every individual film of our industry, Crisp on paper but ends up becoming a boring affair on the silver screen.

The major setback & the reason behind this phenomenon is that the cinema in our industry is not always made with a loyal intention or very dedicatedly. The film making process ends up becoming a mere compromise rather than a dedicated one.

Our film Oskar, takes us back to 1983, where we are introduced you to a  small village named Achinpore, situated at the border of Jharkhand &  Bengal. The village is like any other village, having the entire Zamindari race abolished; the entire village is now ruled and conducted by the  Panchayat system.

The story introduces us to the highly respected Achinpore Rajwadi of the  Achinpore Village which is the only zamindari family left in the village.

The Achinpore Rajwadi is headed by a 36 year old man Rudra  Chatopadhyay, who is a simple man with simple tastes, he still believes  and thinks himself to be the last zamindar alive and wants to contest for  the Panchayat elections and aspires to be the head Panchayat of the  village someday.

Rudra, is not alone in the huge Rajbari, his small family comprises of his young brother Ratul who is an aspiring writer & 85 year old grand mom.  Rudra most of the time is fed up with Ratul as he feels that he is wasting his life behind writing.

One Night, Ratul’s happy time was kind of short lived, he begins to dream about a funky looking man wearing a golden suit and desperately calling his name. Ratul gets out of his dream sweating profusely and thinking about the nightmare. The next morning, Ratul confides in his brother Rudra and informs him about the nightmares.

Rudra gets very worried and tries to call and consult every doctor of the village. Several doctors come and go but they are unable to find a solution to her constant nightmares of the golden suited funky looking man. After meeting a lot of God men & Hermits, Rudra visits a hermit name ‘The PK Baba’ , In PK’s den, Ratul accidently notices a  piece of newspaper, where he spots the funky looking golden suited man  constantly appearing in his dream. On reading the news Article, Ratul &  Rudra comes to know that this statue is non-other than Oscar Statuette,  the Academy Award of Merit ,which is was already won by an Indian  named Bhanu Athaiya that year.

Rudra Chatopadhyay and Ratul seems perplexed and confused not

Understanding why was this dream constantly occurring to him. Back  home, their 85 year old dadi states that their only father all time dream  was to win an Oscar as an actor, but due to his premature death, he wasNow Ratul’s recurring Oscar statue dream is trying to give signals that  Ratul is the chosen one & the only way and the only solution to Ratul’s  ongoing nightmare is to acquire this Oscar statuette by hook or crook.

Now, the deal is on, the entire Achinpore Rajbadi is set out to make an Oscar nominated film. This follows a major laugh riot and a lot of commotion & pandemonium in the entire village.

Right from a fraud film director, to an aspiring actor to a fake Amitabh  Bachchan all join the fun riot. This distracts and attracts the attention of the opponent political party who try their best in sabotaging Rudra  Chatopadhay’s entire plan of making a film and try to over throw him.

Will Achinpore Rajbadi successfully make an Oscar winning film? Will Ratul find a solution to her nightmares? Or there's more to someone (or something) than meets the eye.