Meet The Paglas of Tollywood, Jio Pagla Releasing This Diwali

Posted on 12 October 2017 by Tollykata Admin 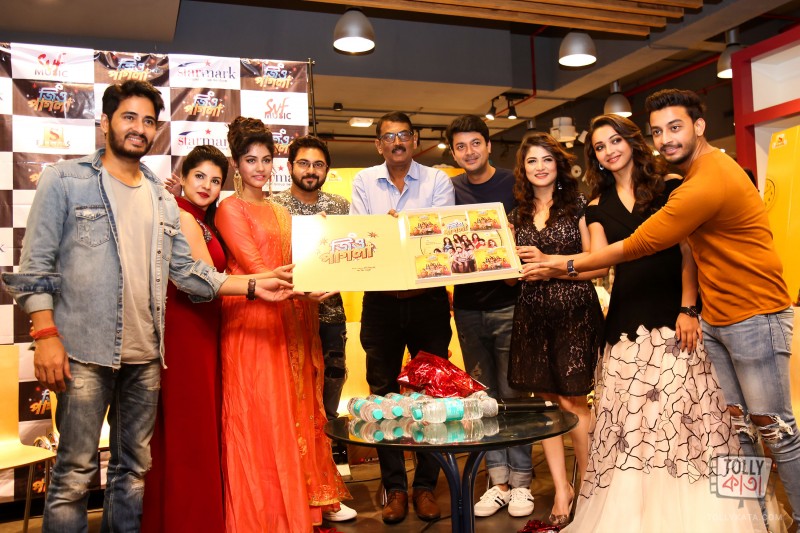 From peppy chartbusters to soft romantic songs, Jio Pagla comprises of three songs composed by Jeet Ganguly. The title song of the movie has been rendered by Monali Thakur and Benny Dayal. Hawai Hawai has been sung by Dev Negi and Monali Thakur and Gorobini Maa, an utterly humorous song sung by Payal Dev where Soham and Bonny will crack you open with their amazing female avatars.

“Jio Pagla is a story of four friends getting into funnier incidents in life, the whole story is a full on entertainer. The music plays an intrinsic role in the movie and has been brilliantly composed by Jeet Ganguly. The songs are already creating ripples on all leading social media platforms”, said Mr Ravi Kinagi, Director of the movie.

“Jio Pagla is an out and out family entertainer and will make an ideal watch during the festive season. The songs are trendy and goes well with the mood of the film”, said Mr Nispal Singh, Director, Surinder Films.

The story is adapted from “Joy Ma Kali Boarding” a popular drama written by Sailesh Dey. Famous bengali actor Shri Bhanu Bandopadhyay was associated with the drama once. Mr Ravi Kinagi has recreated the story in the modern context. The core incident remains same, the lead actors of the movie go on hunting for a place to stay, twist comes when they got to know that in order to put up at the place, they have to tie knots.

Hence the movie seems to be fun and we are waiting for the release to see how much is it justified.

INTERACTION WITH THE “PAGLAS”

The movie Jio Pagla directed by Ravi Kinagi revolves around the story of four friends namely Ananta (Jisshu Sengupta), Sujoy (Bonny Sengupta), Ananda (Hiran) and Rajshankar Dhol (Soham Chakraborty). Ananta is a fashion photographer by profession and he stays at a rented house which is owned by Khogen Mal. Incidents take drastic turns and all his friends pile on him and they start staying together at Ananta’s rented place. Then one day Khogen Mal catches them doing mischief with his third wife Tola Boudi and asked them to vacate his house. Change in place, love and disguise all in all, this entire story is a full on entertainer.

While talking to Soham Chakraborty, he confidently talked about the postive sides of the movie and said, “It is totally going to crack the audience and rock their Diwali”.

Rittika who is playing Soham’s love interest in the movie added, "Everyone had a fun time shooting, Soham is one of the best actors in tollywood and he has been a great support throughout, he helped me with a lot of things. He is a very nice person.”

“Despite being a comedy movie I have hardly laughed in the movie as I play a strict boss who is in love with Ananta but fails to show”, Srabanti quoted.

Hiran Chatterjee plays the role of an IT guy in the movie who is a happy go lucky person. He also shared his wonderful experience working with his co-actors saying, “ I really enjoyed working with the talented lot of co-actors, it is a great exposure for me I believe to work with them”.

The stars also added that the title of the movie is a description of each of the actor’s character along with the captain of the ship, Ravi Kinagi.