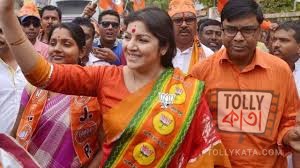 Former actress turned MP of West Bengal Bharatiya Janata Party (BJP)  Locket Chatterjee took to her Twitter handle and said that she has been tested positive for COVID-19 on Friday.

The MP shared the news with her well-wishers, her tweet reads, I have tested positive for Covid19 this morning, having mild fever and was in self-isolation for the past one week. I will keep everyone posted. All is well.

Even during the unprecedented times' Locket was very active with grassroots agitation especially over women issues.

After the party's general secretary of West Bengal tweeted about her condition. Netizens are worried, as on June 19th she was present at the funeral of martyred army jawan Rajesh Orang's funeral in Birbhum district along with BJP MP Saumitra Khan. However, hundreds of people had attended the funeral to pay homage to the martyred soldier.

On June 24, Locket Chatterjee and Saumitra Khan did a protest and blocked a road in Howrah's Bagnan area with the presence of other BJP supporters had staged a road blockade with BJP supporters over the death of a woman who allegedly died while trying to save her daughter from sexual assault.

As the actress turned MP said, all is well. Let us wish for her speedy recovery.